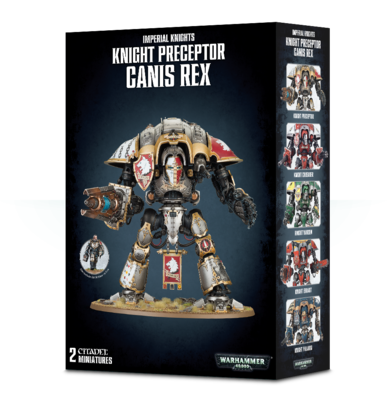 The Knight Preceptor is a Questoris-class close-ranged powerhouse. Its design is intended to exemplify the core tenets of the Code Chivalric in battle: close with the enemy in honourable range, engage them with sufficient force to show respect for their fortitude, and kill them quickly and cleanly in the Emperor’s name. To this end, they are armed with a reaper chainsword or thunderstrike gauntlet and the rare and terrifying las-impulsor. Canis Rex is a notable Knight Preceptor, who escaped the tortures of the Iron Warriors and has punished the scions of chaos with vehemence and fury ever since.

This multi-part plastic kit contains the components necessary to build a Knight Preceptor. This is a serious bit of kit – it contains an entire Imperial Knight Warden kit, along with an extra 37 components which upgrade the basic Knight into the Preceptor – and, optionally, the specific named Preceptor Canis Rex. These components can be broken down as follows:

Using those frames to build the basic Imperial Knight structure with either a reaper chainsword or thunderstrike gauntlet, the following is used to complete the Knight Preceptor:

- A frame of Knight Preceptor components, including the las-impulsor assembly, a unique faceplate, a multi-laser which mounts just beneath the left-front of the carapace, an alternate piece of heraldry for the carapace, 6 wolf head gargoyles, a knee pad with sculpted sword and chain, a cockpit assembly – this fits within the carapace, and can be modelled open to show the throne and control panels along with, if you choose, the seated pilot; a pilot on foot, carrying a power pack; and a unique tilting plate and pennant specific to the named Knight Canis Rex.

This kit can be built as either a Knight Preceptor, Canis Rex, Errant, Paladin, Warden, Gallant or Crusader – the weapons are interchangeable and can be used as spares for any other Knight kits you might have.

The Knight Preceptor is supplied as 250 components, and includes a Citadel 170mm Oval base, a Citadel 25mm Round base for the pilot on foot, and a transfer sheet featuring heraldry for Imperial Knights and heraldry specific to Canis Rex.